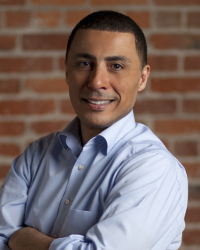 Dr. Yaser Bishr joined Al Jazeera as its EVP for Digital Strategy in May 2013, and led the launch of AJ+, which became one of the top three English news sources on Facebook targeting millennials.

In June 2017 a coalition of Gulf nations led by Saudi Arabia imposed a blockade on Qatar, demanding among other things the closure of Al Jazeera. As part of the blockade these nations geo-blocked much of Al Jazeera's award-winning content from their citizens. Dr. Yaser shifted resources from Snap, which complied with the Saudi request, to Facebook, Instagram and Twitter, which did not. Now Al Jazeera's Arabic Instagram has 2.2 million followers. Dr. Yaser also launched both Jetty, the podcast studio whose first program was selected by Indie Wire as one of the top 50 Podcast Episodes in 2018, and Al Jazeera's immersive media production studio Contrast VR, which won the Online Journalism Award.

Since its founding in 1996, Al Jazeera's history has been inexorably tied to the world's major events.

In Al Jazeera's work you can find it all, from the heights of the indomitability of the human spirit to the lows of dictatorship, repression and the abuse of power.
For decades Al Jazeera has been pushing the boundaries of free access to information, free thought and free expression in one of the most uncompromising parts of the world.

Al Jazeera's newsrooms and bureaus around the world are full of intrepid men and women with stories to tell.

Al Jazeera's journalists have paid the price of trailblazing journalism. Eleven of its war correspondents have been killed on the front lines. One of its journalists was detained in Guantánamo for more than six years. More than one endured depraved torture in Abu Ghraib. For years, it has had its satellite signal scrambled and re-scrambled – and its digital platforms blocked - to make sure that people couldn't watch, read or listen.

Countless others in our storied halls have been detained, prosecuted on trumped-up charges, intimidated, banned, forced to leave their home countries forever – even sentenced to death. Some countries have publicly demanded that Al Jazeera itself be shut down.

We'll keep on shedding light on the dark corners, and telling the stories that need to be told.