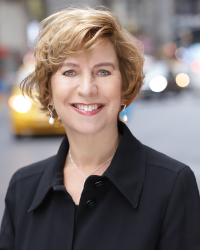 Vivian Schiller is a longtime executive at the intersection of journalism, media and technology. She currently serves as Executive Editor in Residence at Weber Shandwick, as we well as an advisor to news organizations. Most recently, Schiller was the Global Chair of News at Twitter. In this role, she led the company's strategy for news and partnership with journalism organizations and the news publishing ecosystem. Just prior to joining Twitter, Schiller served as Senior VP & Chief Digital Officer for NBC News where she had strategic and operational oversight of the networks' presence on the web, mobile, devices, and social media. Prior to NBC, Schiller served as President and CEO of NPR, leading all of NPR's worldwide media operations. She was Senior Vice President and General Manager of NYTimes.com and Senior Vice President and General Manager of the Discovery Times Channel, a joint venture of The New York Times and Discovery Communications. Earlier in her career, Schiller was the head of CNN Productions, where she led CNN's long-form programming efforts. Documentaries and series produced under her auspices earned multiple honors, including three Peabody Awards, four Alfred I. DuPont-Columbia University Awards, and dozens of Emmys.

Weber Shandwick is a public relations firm formed in 2001 by merging the Weber Group (1987), Shandwick International (1974), and BSMG (2001).
Moving beyond public relations, their creators, strategists and technologists craft campaigns that do more than grab attention – they demand interaction, generating long-term value for their clients around the world.

The Scott Trust Limited is the sole shareholder of the Guardian Media Group, which publishes theguardian.com, the Guardian and the Observer newspapers as well as various other media businesses in the UK.