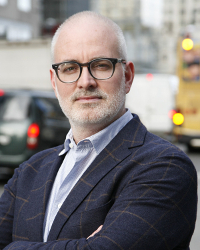 Troy Young is global president of Hearst Magazines Digital Media. Since joining the company in 2013, he has built a continuously growing division that creates and manages the content, technology, operations, product and business development strategies for 20 digital brands in the U.S. The portfolio includes Cosmopolitan, ELLE, Esquire, Good Housekeeping, Harper’s BAZAAR and Delish, as well as Sweet, a collaboration with Snapchat on its Discover platform. Young also oversees Hearst Magazines' international digital business. Last month, Young was named to the Adweek 50 - a list of the top media, marketing and tech executives who are credited with leading the charge toward digital transformation - for the second consecutive year. In 2015, he was named Adweek’s Magazine Executive of the Year, an honor that recognized him for unifying Hearst’s "print and digital brands into a single, well-oiled machine whose traffic has surged" leading to a 75 percent increase in revenue, and for his development of MediaOS, "a combined CMS, ad sales and data strategy tool for all Hearst properties." In 2014, Young was inducted to MIN’s Digital Hall of Fame, and has also made the FOLIO 100 – a list of the most influential and impactful media professionals of the year ­– in addition to being named one of MIN's Most Intriguing People. A media executive and entrepreneur with 20 years of experience in digital publishing and advertising, Young was previously president of Say Media. Prior to Say, Young held several executive positions at Omnicom’s digital agency Organic, including the role of chief experience officer, where he advised on strategy and created award-winning work for clients including American Express, Virgin Mobile, Sirius XM, Chrysler and Bank of America. He has held numerous advisory roles with digital media, mobile and commerce companies and currently serves on the boards of the Interactive Advertising Bureau (IAB) and Digital Content Next (DCN).

Hearst Digital Media is home to a powerful portfolio of brands, from industry- leading fashion and lifestyle properties to some of the fastest-growing voices in food and commerce.

Its success comes from a strong focus on the reader, a commitment to innovation within the evolving media landscape, and its collective ability to create invaluable connections between Hearst's audiences and advertising partners. Its next-generation content marketing solutions tap the vast potential of data and help shape messaging to maximize ROI and drive commercial activity, making their content work even harder.

From inception through distribution and optimization, everything Hearst creates is engineered for action. From the start, Hearst focuses on your ultimate goal ensuring partnerships drive the results and quality actions you want.