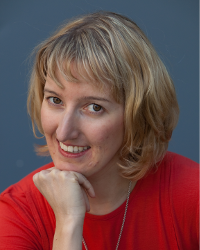 Tanja Aitamurto, Ph.D. is the Deputy Director and a Brown Fellow (postdoctoral) at the Brown Institute for Media Innovation at the School of Engineering at Stanford. She examines how collective intelligence, whether gathered by crowdsourcing, crowdfunding or co-creation, impacts journalism, governance and product design, particularly media innovations.

Tanja is the author of Crowdsourcing for Democracy: New Era in Policy-Making. She has lead the design and implementation of the Finnish Experiment, a pioneering case in crowdsourcing policymaking. She advises and studies Open Government projects in several countries, the projects including topics such as participatory budgeting and crowdsourced legislation. She has attended meetings and given talks about her research in the White House, the Wikimedia Foundation, OECD, the Council of Europe and in several Parliaments and Governments, including those of Canada, Austria and Finland.

Prior to returning to academia, she made a career in journalism in Finland specializing in foreign affairs and reporting in countries like Afghanistan, Angola and Uganda. She has also taught journalism at the University of Zambia, worked at the Namibia Press Agency and covered technology at VentureBeat, a Silicon Valley-based tech blog. www.tanjaaitamurto.com

To achieve its goals, the Brown Institute operates as an academic venture forum. Once per year, we invite the Columbia and Stanford communities to submit proposals for Magic Grants. We look for ideas that are original and have the potential to bring true innovation in the media world. Typically, a Magic Grant supports a small team of graduate students or postgraduates who are expected to demonstrate the relevance and viability of their ideas by implementing a prototype or creating an innovative media product. Successful projects might continue as business ventures outside the universities.

The Institute also awards fellowships; Brown Fellows are postgraduate or graduate students who support the Institute together with their peers and the directors, while working towards engineering prototypes, creating innovative media products, or carrying out related research. Brown Fellows are appointed annually for the academic year; their terms can be renewed.

The Institute was established in 2012 with a generous endowment gift from longtime Cosmopolitan magazine editor and author Helen Gurley Brown. It is inspired by the memory of Ms. Brown's late husband, David Brown, a graduate of both Stanford University and the Columbia School of Journalism. David Brown, who along with partners Richard Zanuck and Steven Spielberg created such classic American films as Driving Miss Daisy, The Verdict and Jaws, was also a former journalist, publisher and, late in his career, a stage producer whose credits included the musicals Sweet Smell of Success and Dirty Rotten Scoundrels..