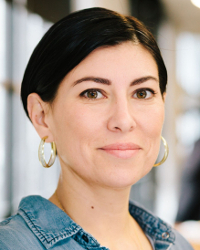 Sarah started her career in civil rights law in New York, but is much happier as a journalist than she ever was as a lawyer. Before founding Outlier Media, she worked as a senior producer and reporter at Michigan Radio, the statewide NPR affiliate. In that role, she covered issues important to low-income families, child welfare and disability. Her work has been featured on NPR, Marketplace, The Center for Investigative Reporting, Bridge Magazine, and The Detroit News.
Sarah believes journalism is a service and should be responsive to the needs of all people. She developed Outlier's model after years of trying to figure out how journalists could do a better job filling information gaps and increasing accountability to low-income news consumers.

A 2015 John S. Knight (JSK) Journalism Fellow at Stanford University gave her the time and support to launch Outlier. She lives in northwest Detroit. To get in touch with Sarah, please contact her at sarah@outliermedia.org or 313-643-5508.

Outlier Media is a Detroit-based investigative and accountability focused journalism organization. We identify, report, and deliver valuable information to empower residents to hold landlords, municipal government and elected officials accountable for longstanding problems in the housing and utilities markets. By keeping residents first, we hope to give more than we take, and leave people with the information they need to create change in their own communities. We are responsive to community information needs and prioritize filling those gaps.