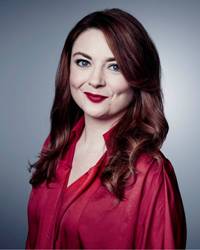 Samantha Barry is the Executive Producer for Social and Emerging Media at CNN Worldwide. Barry leads the social teams at all of the CNN bureaus and works closely with the CNN Digital leadership in their editorial strategy. Her teams span publishing, newsgathering, digital and TV. Under her leadership, CNN has become the most followed and fanned news organization in the world. She has led her team and the organization at large to do compelling work for social audiences on an array of platforms including Facebook, Snapchat, Twitter, Instagram, Line, Kik and other emerging media. Born in Ireland, Barry has worked in over 25 countries, reporting and training other journalists in broadcasting, technology and social media. Barry joined CNN from BBC World News in London, where she served as a social media producer and journalist, focusing on using social media as a tool for both newsgathering and audience building. Barry previously worked as reporter and producer for RTE and Newstalk in Ireland. She's spent time in Papua New Guinea with the Australian Broadcasting Corporation (ABC) and has worked as a social media and technology trainer for the U.S. State Department, the United States Institute of Peace and Internews. Barry graduated from Dublin City University with a Masters in Journalism. She is a 2016 fellow of Columbia University School's prestigious Sulzberger executive program and is a guest lecturer at Yale. Barry is based in New York but continues her extensive domestic and international travels.

CNN Worldwide is a portfolio of two dozen news and information services across cable, satellite, radio, wireless devices and the Internet in more than 200 countries and territories worldwide. Domestically, CNN reaches more individuals on television, digital and mobile devices than any other cable TV news organization in the United States; internationally, CNN is the most widely distributed news channel reaching more than 348 million households around the world; and CNN Digital is a top network for online news, mobile news and social media.

Additionally, CNN Newsource is the world's most extensively utilized news service partnering with hundreds of local and international news organizations around the world. CNN is a division of Turner Broadcasting System, Inc., a Time Warner Company.