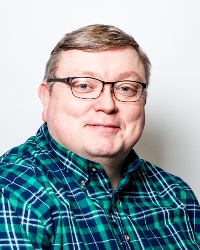 Ole Petter Pedersen (b. 1968) is news editor of Kommunal Rapport (Municipal Report), a niche digital news site and weekly newspaper in Norway, aimed at top local politicians and local government officials. A veteran in the field of data journalism, Pedersen is the major force behind the newspaper's automation projects, where editorial analysis is automatically created – resulting in new digital revenue for the media company. For this work, Pedersen was voted Editor of the Year in the Oslo region in 2016, and he also received an award from the Norwegian Specialized Press the same year. Trained as a journalist back in 1989, Pedersen has worked at Kommunal Rapport for 16 years over two periods, and has worked with data journalism since the millennium. Happily married to his wonderful wife, he enjoys travelling and playing chess in his spare time.

Kommunal Rapport (Municipal Report) was founded as late as 1987, as a biweekly newspaper aimed mostly at politicians and local government officials in the 400+ municipalities of Norway. Today, the media company is a digital first news outlet which also publishes a weekly newspaper. The media company has increased turnover by app. 40 percent from 2010 to 2016, all because of digital content. Turnover in 2016 is just under 30 mill NOK, the equivalent of 3.3 mill. Euro.

Kommunal Rapport has taken to heart the digital subscription revenue model, in much the same vein as The Economist, Financial Times and Wall Street Journal. Although a small media company, the newspaper trades with a solid surplus each year and has experienced strong digital growth year on year.
From having only a weekly newspaper to offer subscribers as late as in 2011, in 2017 Kommunal Rapport will have no fewer than seven different content products to offer its market.

Britt Sofie Hestvik has since 2008 been the editor-in-chief and chief executive of Municipal Report. The media company employs 18 people. The newsroom of 13 people is now bigger than it has ever been in the paper's 30 year history.

The digital version is found here: www.kommunal-rapport.no, with the main automated project presented at www.kommunebarmeteret.no. Another main data journalism project is updated yearly at www.leverandordatabasen.no.