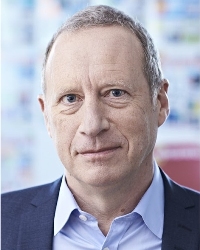 Leif Jonasson is Editor-In-Chief of Komputer for alle, one of Scandinavia's most successful PC-magazines, published by Bonnier Publications in Copenhagen, Denmark. The magazine is also available in Swedish, Norwegian and Finnish editions. He also serves as a Senior Project Manager in his company's efforts to be top of class in their use of editorial IT-solutions. Rethinking workflows and making use of new technical possibilities in order to strengthen efficiency and productivity are the core goals for his project team.

Leif Jonasson studied political science and sociology at Christian-Albrechts University in Kiel/Germany before graduating from the Danish School of Media and Journalism in Aarhus 1986. He began his career at Copenhagen's leading newspaper Politiken as a reporter and sub-editor and was appointed managing editor 1995. Three years earlier he had conceptualized and edited Denmark's first and famously acclaimed weekly PC-supplement for the newspaper. 2001 he joined Bonnier Publications, a subsidiary of the Swedish Bonnier AB Group

Bonnier Publications is the largest publisher of magazines in Scandinavia, with more than 50 titles. Among their most popular magazines are the popular science magazine Illustreret Videnskab, the fitness magazine I Form and the DIY magazine Gør Det Selv.  A staff of 500 is dedicated to supplying information and entertainment of the highest quality to more than two million people who read their magazines every month. Bonnier Publications also publishes books, apps and operates more than 50 websites.

Bonnier Publications specializes in cross border publishing. This means that several best-selling magazines have one main editorial office in Copenhagen, while other versions of the magazine are translated and edited in the country they are published in. Some of the titles are even published by license in other territories.

The Bonnier Publications Group is headquartered in Copenhagen, with bureaus and editorial offices in Oslo, Malmö and Stockholm. Bonnier Publications is part of the family-owned Swedish media conglomerate Bonnier, which owns newspapers, publishing houses and TV stations in 20 countries.