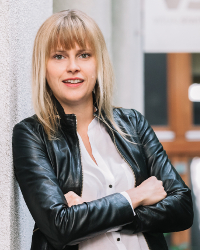 Since 2016 Kerstin has been CEO of the social media publisher VISUAL STATEMENTS. She started her carrier at Hubert Burda Media in 2003 in Germany by joining a graduate program, gathered experience in print as well as online business development and was lately Head of Digital for the German portfolio. In 2012, she joined the team of Burda International, concentrated on the Eastern European and Asian markets. At Burda International she coordinated also the portfolio of investments, mainly focused on e-commerce business cases. In 2015 Kerstin became Global Senior Vice President Branding of Glossybox and President of Glossybox Northern America based in New York. Being a supporter of VISUAL STATEMENTS already before 2016 her entrepreneurial spirit, management experience and digital passion convinced her to develop the start-up into a media company.

VISUAL STATEMENTS was founded in 2014 by Benedikt Böckenförde and created till today a social media brand network that reaches over 30 Million people per month. VISUAL STATEMENTS not only inspires 50% of all Millennials around Germany but also creates trendy products out of the content, that sells several million products a year online and also in over 600 outlets. Apart from commerce native advertising is the second revenue pillow. Big international brands spread their campaigns over the brand network. Within 3 years VISUAL STATEMENT has grown to a social media publishing company that is on the way to expand to international markets. The company is lead by Benedikt Böckenförde and Kerstin Schiefelbein running offices in Freiburg and Berlin.