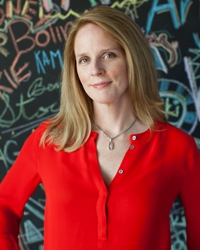 Kelly Day is the Chief Digital Officer of AwesomenessTV, the leading multi-platform media company serving the global Gen Z audience. Day joined in February 2014. Prior to her current position, Day served as CEO of venture-backed Blip Networks, leading the company's evolution from an online video platform for independent producers to a multi-platform media company. At Blip, she forged numerous strategic partnerships with top Hollywood and independent studios, and digital distributors such as YouTube, AOL and Yahoo. She led the development of a new suite of mobile, tablet and OTT apps for iOS, Android, Kindle, Xbox and Roku, establishing Blip as the go-to digital network for quality creators. In 2013, she sold Blip to Maker Studios, one of the top YouTube Multichannel Networks. Day's expertise in digital media and commerce makes her a sought-after speaker and commentator on the future of television, the evolution of online business models, and the disruption of traditional businesses through emerging technology. She has spoken at numerous industry events, including CES and Digital Hollywood, and is frequently interviewed by major media outlets including The Wall Street Journal, Bloomberg TV, Advertising Age and Variety. Before Blip, Day led the Digital Media and Commerce businesses for Discovery Communications, including the company's sixteen U.S. websites, E-Commerce Operations, Licensing, and Home Entertainment. Day was responsible for developing and executing long-term strategies to drive the growth of these businesses through innovative offerings that leveraged the company's television and digital assets to grow digital audience and user engagement, and increase product sales. While leading this business, Day was credited with delivering record-breaking growth and bottom-line value for the division. Prior to joining Discovery, Day served as Vice President of E-Commerce at The Knot, the leading wedding media company, where she spearheaded their e-commerce business and developed partnerships with major retailers, such as Target and Macy's. Prior to that, she held a variety of E-Commerce positions at AOL, most recently as Executive Director of AOL Shopping, with responsibility for developing new products and platforms at a time when online shopping was becoming a powerful disruptive force in the retail industry. In addition to her professional life, Day is married and has two daughters.