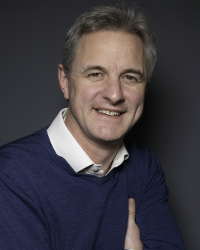 Jim is the Chief Marketing Officer for the Jeremy Clarkson, Richard Hammond and James May backed social platform DriveTribe, where he oversees international partnerships and platform growth, while mucking-in on the full round of tasks you'd expect in start-up life.

Since beginning his career in sales in the launch team at FT.com, he has spent much of his career working for digital automotive companies. In 1999 he joined Auto Trader, directing product strategy and business intelligence, overseeing a series of web site launches, extension to mobile and Auto Trader's first dealer portal. He then moved to Haymarket, where he directed digital strategy for the consumer magazine division and was part of the team that purchased pistonheads.com. Other motoring stints include Director for Exchange & Mart and launching SunMotors and re-positioning Driving.co.uk at News UK. Non-automotive positions include digital marketing at British Airways, RBS and CEO at travel publisher TNT Magazine.

The platform offers motoring enthusiasts and entertainment seekers a place to share content and engage with like-minded individuals. Over 1,500 articles, videos and photos are uploaded every day by celebrities, influencers, journalists, brands and a longtail of petrolheads and citizen journalists.

Since it began monetizing last April, it has shown strong commercial growth with a notable focus on branded content integrated into targeted communities. Aside from providing an environment to build followers and a sequential brand story, the Tribe model has proven a powerful data generation platform.

Over the past eight months DriveTribe has begun to internationalize its presence, launching local versions in China, the USA and Australia. It is also working with global media partners to commercialize its overseas footprint, using local expertise to sell community sponsorship that add value to partner sales models.