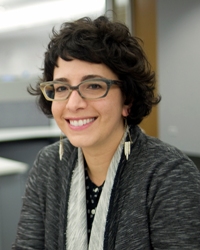 Jennifer Brandel is the CEO and Co-founder of Hearken. She began her career in journalism reporting for outlets including NPR, CBC, WBEZ, The New York Times and Vice, picking up awards along the way. In 2012 Brandel founded the groundbreaking audience-first series, WBEZ's Curious City, and is spreading this responsive journalism model around the world via Hearken. Her company participated in the Matter VC accelerator in San Francisco and took home the prize for "Best Bootstrap Company" at SXSW in 2016. That same year, Brandel was awarded the Media Changemaker Prize by the Center for Collaborative Journalism.

Hearken is a groundbreaking strategy and model for audience-first journalism. Our supporting platform enables newsrooms to engage the public throughout story creation at the pitch, assignment and reporting phases. Traditionally, newsrooms don't get the benefit of public feedback and insight on stories until it's too late ‒ after stories are published. Hearken corrects for this flaw through a combination of process and custom technology. Newsrooms using Hearken have found it leads to original, relevant and high-performing content as well as generates valuable email leads for newsletters and membership.