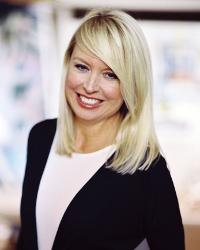 Hilmar Mulder (Seoul, 1968) is currently the editor in chief of Libelle, the biggest womens weekly and mediabrand of the Netherlands. Before being appointed to this position in 2015 she was the editor-chief of ELLE Netherlands. She was recognised with the Dutch Editor of the Year award in 2010. The jury praised her for having a strong public profile on social media and also as a fashion and celebrity expert, thanks to appearances in television programs like Holland’s Next Top Model, Shownieuws and Holland’s Best Fashion Designers. And of course there was also the unstoppable success of Grazia magazine in the Netherlands. The magazine she was founding editor of. Before she was appointed to launch Grazia in the Netherlands, Hilmar acted as editor-in-chief of the Dutch Cosmopolitan for more than three years, a position she obtained after successfully working as a fashion, beauty and lifestyle director for Marie Claire. At this magazine she started out as an fashion editor after preceding jobs for the weekly magazines Viva an Yes. Hilmar is a graduate of the Willem de Kooning School of Arts and lives in Amsterdam with husband and two sons.

Apart from a weekly reach of 1.8 million people and a spontaneous unaided awareness of 90% Libelle is since 1934 the biggest women's magazine of the Netherlands. Libelle is published by Sanoma Media Netherlands and s so much more than just a weekly magazine. With a website with the biggest reach among women in the Netherlands, the biggest yearly open air brand event for women, a monthly special interest magazine, a comic line, agenda's, calendars, cookbooks, a fast growing video platform LibelleTV, a monthly bookazine Libelle is in touch with Dutch women 24/7 always with the same recognizable warm welcome feeling and helping her audience to make a good life better.