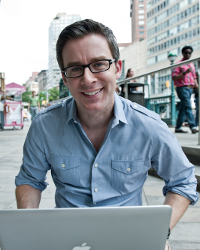 Daniel Sieberg has more than 25 years of experience working at the intersection of technology and journalism. In November 2017 he joined Civil, a decentralized marketplace for sustainable journalism, as head of journalism operations and co-founder. Sieberg previously worked at Google in NYC as co-founder of Google for Media and head of training and development for the News Lab, which is Google's global team responsible for liaising with the editorial side of newsrooms to drive innovation and new forms fo storytelling. He previously spent 20 years as a science and technology reporter and analyst for the likes of CNN, CBS News, ABC News, Details, MSNBC, the Vancouver Sun and BBC America. Sieberg has been nominated for 5 National News & Documentary Emmy Awards and is the recipient of a Peabody Award as part of CNN's coverage of Hurricane Katrina in 2005. His first book, The Digital Diet (Crown), was published in 2011 and reprinted in several countries. He holds a M.J. from the University of British Columbia and a B.F.A. from the University of Victoria. When not thinking about the future of journalism Sieberg spends time doing spin classes, traveling and spending time with his wife and daughters on Long Island in NY.

Civil is a self-governing marketplace for journalism where readers ("Citizens") directly sponsor publications ("Newsrooms") and journalists ("Newsmakers") collaboratively run their own Newsrooms. We're operated via a token economy that runs on the Ethereum blockchain. This approach allows us to take the "middleman" — publishers, advertisers, etc. — out of the equation, while also ensuring a greater degree of credibility and transparency across newsrooms on the Civil platform.