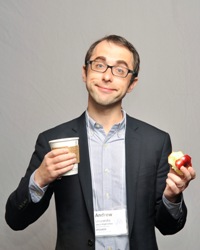 Andrew Losowsky is the Project Lead of The Coral Project, an open-source collaboration between Mozilla, The New York Times and The Washington Post. He was a John S. Knight Fellow at Stanford University, and worked on product and editorial at News Corp and The Huffington Post. He has written for The Guardian, The Wall Street Journal, and The Times of London, and has also co-created a pop-up magazine, a museum on a street, a festival of independent publishing, a printed time capsule, and a human-sized board game about city development. He lives in New York City.

About The Coral Project at Mozilla Foundation

The Coral Project is a collaboration between Mozilla, The New York Times, and the Washington Post. It brings journalists and the communities they serve closer together. It fulfills this mission through open-source tools and practices for newsrooms of all sizes, as well as by running events, and publishing academic research and guides to best practices. The Project's goal is to raise public trust in journalism, to increase the diversity of voices and experiences reflected in news reporting, and to improve journalism by making it more relevant to people’s lives. Because journalism needs everyone.