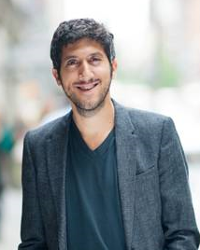 Adam Singolda leads Taboola's business strategy, execution, and development while maintaining the company's unique culture of quantification and innovation.
Prior to founding Taboola, Adam developed his analytical skills while serving as an officer in an elite mathematical unit of the Israeli National Security Agency (don't ask, he can't tell you).

Adam is an honored alum of the Israeli Defense Forces' elite computer science training program and graduated first in his class at the Officers Academy of the IDF. He has been named one of Israel's top "30 under 30" business managers by TheMarker, and "Entrepreneur of the Year" by Geektime.