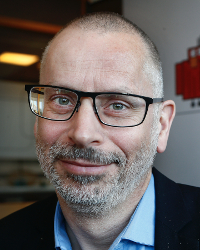 There is a lot of discussion in media and tech circles about automated content and how it might change the dynamics of the way that shortform stories, especially in the newsroom, are created. Yet behind the scenes innovative startups have been quietly working away to set up pilots, experiments and now live partnerships where machine learning bots actually deliver that structured, data heavy content.

Among the innovators are United Robots who have been working with several key players in the Swedish media on creating sports and property related content. Sören Karlsson, the company's founder will be presenting at DIS explaining how the collaborations came about and what the key challenges are for both the media companies and the automated content innovators.

Tell me about your career so far - what was your journey to United Robots?

I have been working as a journalist, in various positions, for more than 30 years - pretty much all of my grown-up life. At the local newspaper Helsingborgs Dagblad, in the south of Sweden, I was responsible for all things digital for almost 10 years, before exiting to start United Robots. I’ve always been interested in the intersection between journalism and tech, and the Natural Language Generation technique that underpins what we are doing at United Robots is just that.

What is your main role at United Robots?

Together with two partner companies I founded United Robots three years ago, and I am now the CEO of the company. That, basically, is all about talking to media companies about automated content, making them understand how it can be used. And by now, a vast majority of local Swedish media houses are our customers.

Can you give me some of the best uses of automated content by media companies so far? Who is inspiring you?

There are many benefits - and some challenges - from bringing automated content or text robots into the newsroom. The most successful examples are when a publisher manages to maximise the benefits and overcome the challenges.

One example is how Swedish publisher NTM built a new site for all football in the region of Östergötland. The United Robots Sports bot writes two stories for every game played in the region, during the whole season. “Klackspark.com” has given them a new younger audience, a growth of revenue and lots of local goodwill.

Another example is the Property bot and the Local companies we developed for MittMedia, which are now running on many Swedish news sites. MittMedia managed to get the distribution problem right, and can offer readers super-local news in their news feed.

Who inspires me? I am inspired by publishers that are curious and/or understands the potential of automation. That pushes us to continue to develop meaningful and profitable solutions for them.

What are the other areas that you think that bots will create content? And how do you think this will impact on the role of journalists within news organisations?

If there is data that can tell stories, we can put that into writing. The data sets will continue to swell, the computing will get cheaper and faster and the demand for relevant news on a personal level will grow. All this is favoring automated content.

That said - good journalists will continue to be the most important component of any serious news operation. But journalists will work side by side with ever more powerful automation tools - or robots. Automation will not replace reporters, but will inevitably take care of some of their work.

Where do you think bot content creation will finally lead us? Will it, for example, change the creation and monitoring of social media content? Are we going to see more bot created video?

Hasn't bots already changed the creation and monitoring of social media content? That won’t go away. I’m not an expert on video creation, but why should that field be spared from automation?

We are talking software development here - will that come to a halt? I don’t think so. Where will it lead? Who knows…