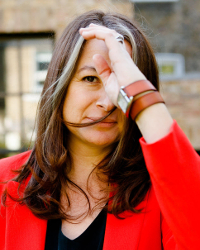 One of the big media events of last year was the announcement of the launch of Tortoise  - the ‘slow news’ startup helmed by a quartet of high profile execs. Between them, ex BBC News Director James Harding, former Dow Jones president Katie Vanneck-Smith, independent director, Ceci Kurzman, and former US ambassador to Sweden Matthew Barzun hope that they can disrupt the the way people consume news by delivering it a more thoughtful, less instantaneous way.

Tortoise went live with a daily newsletter in January and has big plans for events and an accompanying  print publication. Yet how did the concept of Tortoise come about, and are we really starting to witness the start of a slow news movement?

At DIS 2019 Katie Vanneck-Smith will be outlining the company's vision and updating conference delegates on its progress to date. Here she talks of her personal journey from her role as President of Dow Jones, through to setting up printers and running Google admin accounts as a key player in a startup.

How did the idea for Tortoise evolve? Was there a eureka moment? Or was it a more gradual process?

It was gradual. Suitably Tortoise-like. James Harding (Tortoise’s co founder and editor) and I have both worked in this industry for a long time. Along the way there have been a-ha moments, shifts in the sands of how news works, and how people want news to work - some of which we’ve been part of some of but not all - and all of these add up to what we’re doing with Tortoise. Some of these shifts - or example, what happened at Grenfell, or VW, or even the rise of populism - have been catalysts for big, philosophical reflections about the role of journalism in culture and society, about responsibility and accountability. Some are more prosaic but no less important to us - like the way a whole generation of people have been re-educated not to expect quality news for free since we introduced the paywall at The Times.

What would you say is the key problem that Tortoise is trying to solve? How do you define ‘slow news?’

Tortoise is a response to two things. First, news has become noise. The problem isn’t just fake news or junk news, because there’s a lot that’s good – it’s just that there’s so much of it, and so much of it is the same. In a hurry, partial and confusing. Too many newsrooms chasing the news, but missing the story. Second, the power gap. The divide between the powerful and the powerless is widening and people feel locked out.

Slow news sums up a way of looking at the world - critically but reflectively, and wherever we can optimistically. As humans we can’t possibly see everything. So we’re not going to cover everything - part of being slow is about making choices, and taking our time to make those choices. We couldn’t and wouldn’t say ‘we’re here to fix everything’ but it is important to try to fix on what matters to us, to explain why we think it matters and to ask questions that go beyond ‘what happened’. How did we get here? What might happen next? What further reading should we do? And most importantly - what do you think? Part of being slow is making sure that as many people as possible are proactively engaged in contributing to the answers in a meaningful way, not just a vox pop thrown together on a street corner. You can’t do that in the normal news cycle.

You were President of Dow Jones - how did you feel about leaving established media to run a startup? Are there new skills you have had to learn?

This is a path well trodden - senior executive from big company leaves to run a startup and finds themselves plugging in a printer. It’s thrilling and terrifying to really feel you have your hands on the steering wheel, you feel every bump in the road. When we started we were literally in James’ kitchen. I’ve learned how to rent an office, how to set up a Google Administrator account. I’m out having commercial conversations with partners in a way I haven’t for a long time. I logged into a CMS and edited some copy the other day. I was really proud of myself.

How important do you think the print element is to your business vision? How will you distribute the journal?

We don’t know yet because we haven’t printed one so members haven’t had chance to tell us, but my instinct is it’s really important. In the print edition we have the luxury and responsibility of more words and longer lead times. The aesthetics of Tortoise have been important from the get go - the tactility of it is something members really care about.

And what can subscribers expect from their daily emails?

At the moment the daily email is an editor’s letter that gives the rationale for the five stories of the day - so, why these 5 out of the 5000 we could have chosen? It’s evolving too. Our instincts as news people are to publish publish publish we’ve already had to have a word with ourselves several times to say: SLOW DOWN. If we promise news when it’s ready and its not ready then we can’t put it out. It is taking some time for us all to get used to that way of working.

Emily Bell suggested you need a war chest of £30 million to fund the business for three years. Long term how do you expect to fund Tortoise?

Membership. We have a very clear eyeline on the scale of the business. In the next three years, partnerships and affiliates will be important to get us there - we’re really, obsessively members-first. Not just because it means we can keep the product ad-free but because the whole point of the concept is that members participate in the product. They literally shape it - at the ThinkIns and through all the feedback they give us. They are the engine. We can’t do ‘open journalism’ if it’s just us.

And what do you think will be the key to monetisation?

When people believe we’re offering something different, when their friends and family say ‘this is a new way of doing news - you should be a part of it.’

With Axios in the US and other startups, are we seeing the start of a global slow news phenomenon?

It’s certainly not just us that’s doing this. I think there is a coming together of the people who’ve been writing news and people they’ve been writing it for - it’s been coming for a while, at different rates perhaps in the US and UK and across Europe - but the barriers are coming down. They have to. At the moment it feels right to start over, so new news brands like ours have an opportunity to re-cast the die and say, “OK there is an alternative.”

Where do you imagine Tortoise will be in five years' time?

Everywhere, I hope. Obviously, there’s a five year plan but in the spirit of going slow, we have to be very mindful we don’t run before we can walk. We’re already global - we have members all over the world - but we’re still a tiny, tiny startup. It is much more important that when we grow we grow well, than that we grow at any cost. One big ambition we have is that the concept of a ThinkIn crosses over into general parlance. Something that groups of people - book club or a working men's club, it could happen in schools, pubs, churches, anywhere - do proactively when they want to grapple with something, to come to a point of view together. To resolve a question, to give. everyone a chance to have a say.  Civilised disagreement we call it. If people feel that they can disagree in a civilised way, we'll all be so much better off.