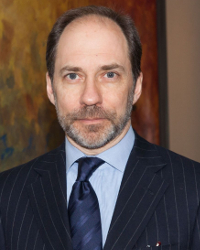 Marcus Brauchli has had a long and distinguished career including a stint as managing editor of the Wall Street Journal and four years as executive editor of The Washington Post. Today, through his investment vehicle North Base Media, he is working to develop the next generation of publishing innovators.

Here he explains how he believes AI and data will disrupt the media, what he looks for in startup founders and why India and Indonesia are two markets that media entrepreneurs should be closely looking at.

Marcus will be presenting at DIS 2019 focusing on ‘challenges, opportunities and lessons from emerging media markets around the world.’

Tell me about your career so far - what was your journey to North Base Media?

I spent much of my career in journalism and have worked in just about every medium—photography, television, radio, newspapers, magazines and digital. I also have worked globally—in Asia, Europe and the US. Those experiences shaped a core belief about the dynamics driving media today. There is a convergence of media forms taking place at the precisely same time that the advantages long held by big, developed markets are being upended by the advantages of emerging markets with immense populations of young, digital natives.

What was the catalyst that lead to the formation of North Base Media?

The immediate catalyst to the formation of North Base Media was a 2013 meeting in a Washington coffee shop (the late, lamented Bean & Bite) with Sasa Vucinic, a brilliant, inspiring figure in global media. In 1992, Sasa had started B-92, then an independent radio station in his native Belgrade, Yugoslavia. After the Balkan wars erupted, Sasa decamped for Prague and, after some experimentation, co-founded the Media Development Loan Fund, Europe’s first impact fund, which backed a significant number of media outlets that sprang up in the historic transition of post-communist eastern and central Europe. As he and I talked, it was clear we shared a vision—that the growth opportunities for media lay in the world’s big, new markets, where huge numbers of people, many of them never having regularly read a newspaper, magazine or website, were just getting access to smartphones and mobile data. So we decided to start NBM and see how we could participate in the coming revolution.

What do you think is the most interesting area in media at the moment from an investor/VC perspective?

As investors, we look for good ideas, market openings and smart founders. We have some longer-term thematic views—big data and AI will spawn new forms of content, especially in business information; successful media companies will have multiple revenue pillars, not just advertising and subscription; disintermediation is going to make life difficult for advertising agencies, cable operators and other bundlers—and we incorporate them into our decisions.

Do you think the way that the media has evolved in the last five years has created more or less opportunity for entrepreneurs?

The nonstop evolution of media has created vast opportunity for entrepreneurs, but it also makes it difficult to sustain success. You can get very big in one wave of change and get clobbered in the next one. We like companies that have skillfully navigated the waves, like the global digital-media platform, Minute Media, which started as a mobile-football app, or surfed them, as one of our tech investments, OpenSlate, so successfully has done in building the ad industry's best digital-video measurement and analytic platform.

You focus on growth markets in Southeast Asia, India, MENA and Latin America. Do you think that the next huge media and tech companies will come from these regions rather than the US and Europe?

It’s not so much that we think the next huge media companies will come from big growth markets like Indonesia, India or Mexico as that we think there is a real path to create successful, profitable media enterprises serving the large numbers of people in those markets, without some of the friction you will encounter in a saturated market like the US or Europe. The prospects for a clever media startup are just a little bit better. We invested in IDN Media in Indonesia and Pocket Aces in India, both of which have grown incredibly rapidly by pioneering new forms of content for young audiences.

What are you most looking for now from entrepreneurs? Is innovative disruptive technology the most important thing?

Once we’ve persuaded ourselves that there is a market opening for a product, we look for the smartest, most creative founders we can identify. Few startups in any field go in a straight line, and you want someone who can pivot and adapt, not someone who is rigid. We’re investors in Piano, the digital-content monetisation platform, which has morphed under CEO Trevor Kaufman into a very smart, fast-growing SaaS business.

How do you think venture backed media companies like BuzzFeed and Vice Media will evolve in the coming months/years?

I’m not sure I’m qualified to opine on the big US digital-media companies, but I will say they are in a tough market. The incumbents in a saturated market like the US still have a lot of capital and tremendous brand value. They may have been slow, but they are adapting. In news, for instance, The New York Times and The Washington Post are bedrock providers of news. Other platforms may produce commentary or video keyed off of their content, but it builds on their content. To peel audiences away from them in a sustained way is expensive and challenging.

What advice do you give entrepreneurs looking to launch disruptive media businesses?

If you’re trying to launch a disruptive business, be sure your focus is on the end customer, not the industry you’re trying to disrupt. Far too frequently, founders think in terms of winning market share from an incumbent company not on serving an audience and doing something essential for them.

Which recent media/tech company that has attracted funding do you most wish you had invested in? Which one got away?

The company I most wish NBM had an early investment in is Gro Intelligence, which I’m now advising. It’s revolutionising the food and agriculture information world, which is a Very Big Thing. The data Gro produces create narratives and understanding that will change the world. When the US government had furloughed the Agriculture Department in January, Gro ended up producing the ag data that food companies, agriculture producers and governments around the world needed.