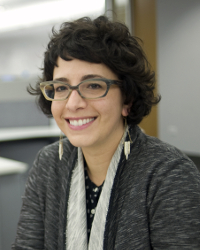 When she presented at DIS2017, Jennifer Brandel caused many of the media delegates present to look again at the process of how they make decisions in their newsrooms. Hearken, of which she is founder and CEO, offers a ‘listening first’ model supported by a technology platform that enables communities to have a much greater say in the stories that are created for them by publishers.

Jennifer argues that Hearken’s platform delivers a win for both communities wnd news organisations as she believes the stories that are driven by readers tend to deliver greater levels of engagement, and ultimately more subscriptions and memberships.

Here Jennifer talks about how Hearken came into being, which community driven stories do well and why, and how the company is now eyeing European expansion.

Explain who you are and what Hearken does?

I’m a former journalist and now the CEO and co-founder of Hearken.

Hearken is a new model for including the public in the process of reporting. The resulting content is higher-performing, original and converts people into paying subscribers or members at more than the double rate of typical stories. We do this through process and product innovation - helping newsrooms weave feedback from the public into their decision-making to produce more relevant content.

What was your lightbulb moment - when you realised the power of engaging audiences early in the editorial process?

It was one of those shower moments, where you’re kind of in a dreamy state, free-associating. I just started asking myself: why are journalists expected to be able to know what information the public would find most relevant? They’re not set up for success - as they can only draw from their own limited worldview and experience. The public should be part of that process to help newsrooms understand what they don’t know that they don’t know. I couldn’t shake the feeling that the process of making stories was fundamentally flawed and needed updating.

Contributing to this eureka moment was surely my experience working for the Baha’i faith. The way they approach community work is not by saying “Hey - I see a problem you have. I’ll tell you how to fix it.” They say: “You know your problems best. How can I be of service?” I wondered - what would the news be like if journalists didn’t assume the position of “Hey - we know what you need to know,” and instead asked “What do you not know that we could help find out for you?” That very subtle shift changes every downstream decision and outcome.

And talk me through examples of higher performing stories?

Many of our partners have achieved their newsroom’s top stories of the week, month and of all-time through Hearken’s public-powered model and technology support. (For instance, KQED did this study that showed their Hearken-powered stories performed 11-15x better than their typical stories.)

Why do these stories do so well? Because they meet public needs that newsroom’s processes and filters did not (and could previously not) identify. Over time, newsrooms develop a somewhat fixed notion of what constitutes something that’s newsworthy or what information their community would find most relevant. Turns out the public has a much wider perspective on the information they’d like newsrooms to provide for them.

The resulting stories are also original - no other news outlet has these stories. They are not the result of a press release, or some topic that’s trending on Twitter. This means the public can only find this information with the brand that is listening best to them, which creates more loyalty.

Our model can be used on any kind of story - the newsroom can decide what the framing is for the questions they are collecting. The resulting stories can be  investigative, topical, human-interest or pegged to a news event. Here are a few examples of stories that have been extremely high-performing for the newsrooms that produced them.

Texas Tribune’s Texplainer: Why does Texas have so many counties? A history lesson

 KPCC’s SoCal SoCurious: We answer your questions about the California wildfires

 WAMU’s What’s With Washington: Is there a Washington D.C. Accent?

What are the core monetary benefits for publishers who engage audiences in this way?

We’ve found that newsrooms we work in benefit in a variety of ways: increased paying subscribers / members, paid advertising or sponsorship and paid events. One study found Hearken-powered stories convert people into paying members at a rate of 2-5x. Our technology can also connect to services like MailChimp and CRMs, so the thousands of email addresses our partners are collecting on the editorial side can flow into the marketing and business sides of the news organization. We have found that across our 130+ partners, when they offer the public the ability to opt-into a newsletter via our technology, 56% of people do. This is a high quality lead generator for further engagement - be it editorial or financial.

For newsrooms that have membership programmes and like to offer premiums for people who subscribe or donate, we’ve found that Hearken-powered series have deep audience loyalty and recognition. Our partner Vermont Public Radio did a pledge drive that had a t-shirt from their series Brave Little State as a thank you gift. They sold out of t-shirts immediately and raised 10% of their entire membership drive goal through this offer.

Many of our partners have found local businesses and brands who want their name heard and seen alongside this community-generated content, and have earned $100,000+ for sponsorship of a series. And partners have also created paid events related to this content that sells out quickly.

How do you see Hearken fitting in with more established data-driven approaches? For example, trend topics and timelines which give us a pretty good indication these days of what people want to read about and share.

Hearken provides a new stream of insight, actionable feedback and data, and can complement the traditional data news organizations are collecting. What worries me about trends and big data is that it has a tendency to make the world smaller, and to decrease the number of original stories in the world. If a topic is trending on Twitter, and then every news outlet begins covering it, that topic will continue to grow and trend at the expense of news organisations putting their focus elsewhere, where they can create original reporting that benefits the world.

The other problem about looking at data to show what’s popular and what’s performed well to plan future coverage, is that you’re rendering people down into data points, and looking at them as a mass. This means you miss the deep, rich insight that individuals have. You are performing a kind of archaeology to try to determine what any given culture or group did, versus performing anthropology and going deep with real people, who can offer far deeper insights and narrative power than an amorphous group.

For Hearken, our animating question isn’t: “should we give people what they want or what they need,” it’s “what do people not know that we could help find out for them?” This question is a powerful tool to re-align journalists with their main function: to serve the public so they can do their job as informed citizens.

Do you think it is an issue that so many media companies now have switched off comments? Do you think they see engagement as less of a priority?

At Hearken, we choose to focus on engaging pre-publication, where the public’s input can be used at the moments its most useful. And we focus on curiosity, not commentary, which attracts a different tone. In order to ask a question, one must have a certain amount of humility.

You presented at DIS2017 - how has Hearken evolved since then?

We have grown a lot as a company, not only in the number of staff, but also in the level of sophistication of consulting we’re able to offer our partner newsrooms. We’ve found that most reporters are focused on activities (E.g., reporting a certain number of stories a week) instead of outcomes (E.g., growing a newsletter subscriber list by 3x). So we help reporters start considering performance indicators, goals and metrics to help guide their decision-making and work in ways that aligns with their journalistic mission and the news organization’s strategic goals.

We are also going to be hiring staff in Europe to help serve our European partners. So far we’ve grown by word of mouth, and as we add more European newsrooms, we want to have people who can easily hop on a plane or train to guide them through their evolution.

What would you say were the key lessons you have learned?

We have learned that no amount of technology will help it survive this seismic shift in the industry. It’s about doing the work differently, thinking differently and relating to the public differently. Simply put, newsrooms can’t do the same things they’ve always done, just faster, to evolve in this new world. So we believe that before an organization tries to implement technology, they first must focus on developing their staff capacity, talent, and the techniques to work differently. That’s when technology can be leveraged for the biggest change.

Which is one reason why we’re rolling out new services that are independent of technology, and technology-agnostic. We’re focusing more on helping newsrooms shift their thinking and culture first, which is by far the most powerful place for innovation and the release of new energy.

Are there ways in which newer technologies - such as AI and blockchain - could be used by Hearken to enhance the offering in the future?

Sure! We try to stay a few steps ahead of what our partners need to succeed, and right now AI and blockchain won’t be useful until news organizations can organize their workflows and activities to be responsive to the public. That requires an entirely different kind of AI: Actual Intelligence.