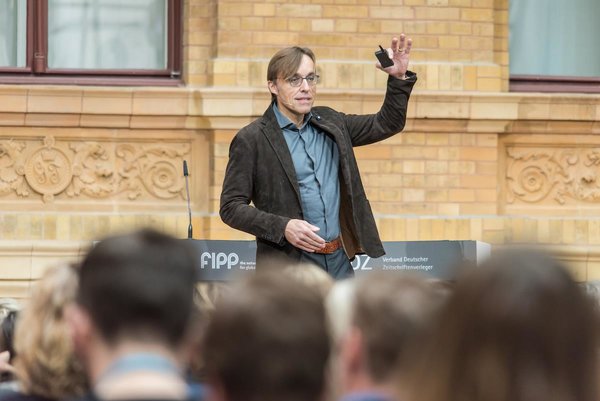 From being described as an “internet midget” losing hundreds of millions a mere 17 years ago, Axel Springer managed to rebuild itself into a digital publishing powerhouse. Dr. Andreas Wiele, President Classifieds and Marketing Media at Axel Springer, Germany, explains how the German media giant faced off a near death experience.

“Axel Springer missed the boat,” said Dr. Andreas Wiele, President Classifieds and Marketing Media at Germany’s largest media group Axel Springer, describing the events at the birth of digital publishing in front of hundreds of media executives during the second day of the Digital Innovators’ Summit in Berlin. He described the rapid decline of the publishing empire built by journalist and entrepreneur Axel Springer, the man who created iconic German newspaper and magazine titles such as Bild and Die Welt.

The truth, said Wielie, is that around the turn of the Millennium Axel Springer did not have a digital publishing strategy. From Europe’s most successful publishing business with record sales and record profits Axel Springer witnessed a “horrible loss” of €200 million in 2001. At the time the Financial Times reported: “Europe’s largest press conglomerate (is) a mere internet midget.”

In fact, said Wiele, the digitalisation of publishing truly brought about “a near death experience” for the company. Overnight the publisher needed to come up with a radical strategy to survive. “If you are convinced that your business will go down because there is simply a better offering and technological breakthrough, then there is only one way forward: you have to cannibalise yourself, disrupt yourself, and trust yourself. This needs to happen at full speed and determination because the opposition do not own a legacy business and do not mind attacking your business.”

In this process legacy publishers need to ask themselves what sets them apart from the rest and what you can do better than those starting out in your space of business, said Wiele. In Axel Springer’s case they realised that their publications essentially combined three individual businesses: selling journalistic content to consumers, selling classified advertising and marketing. The only thing that bound these three businesses together was the physical paper itself.

“But the internet ripped these components apart,” said Wiele. “It is much better to search for a new job or house or car on specialised websites and read an interview with Donald Trump on a site specialising on that content. And the same is true for marketing where it is much more efficient to focus on the interaction between brands and consumers than to just put display advertising up somewhere.”

Axel Springer decided to continue with these three businesses components but in the way it would be functional on the internet - separate from each other.

Journalistic content was put behind a paywall in a freemium model at their largest newspaper title Bild. “People do pay for content if they believe that it is worthwhile.” The newspaper has now grown its digital subscriber base to almost 350,000, which contributes a “significant amount” to the revenue.

It is important that content remains independent and unique, warned Wielie.“That is the only way to set you apart from the big distribution monopolies like Facebook and Google. If you have content that the readers wants to consume, you will be able to have a strong position in the digital sphere.”

To ensure alternative and independent distribution of journalistic content, Axel Springer has partnered with Samsung who holds more than 40 per cent market share in Europe to roll out the Axel Springer ‘upday’ news app on their smartphones. It offers customised content curated by the user as well as “must read” selections curated by journalists and editors. Upday is now the most popular news app in Germany, the second most popular in France and third largest in the UK.

In a further commitment to quality content, Axel Springer acquired Business Insider “for a significant amount of money”. The website is fast becoming “the true leading business and financial information site for the new generation. We have 120 million unique users and monetisation is growing very successfully,” said Wiele.

In the case of classified advertising - primarily focussed on jobs, cars and real estate - the internet proved to be very efficient and profitable “if you manage to capture the largest market share”. Axel Springer is now the world’s largest classifieds operator through internationalising their classifieds offering across geographical boundaries.

Referencing the growth of platforms, Wiele also warned that in the case of marketing, publishers need to ensure that they manage advertising sales by themselves, or at the very least, in partnership with other publishers. To leave this in the hands of “any of the big platforms” would be a mistake “you will not survive in the long run”.