As VP of International for Buzzfeed, Scott Lamb is ideally placed to talk about the rise of social media. He explains how Buzzfeed is evolving, and why so many businesses still get social wrong… 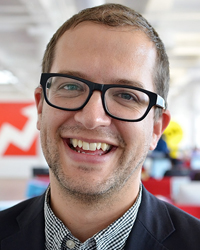 Scott Lamb is the Vice President of International for BuzzFeed, a leading media company for social news and entertainment. Scott is responsible for the international growth and expansion of BuzzFeed. Scott joined the company in 2007 as a senior editor, became managing editor in 2009 and was promoted to editorial director in 2012, where he created the Web's most engaging and shareable content.

He will one of several leading speakers at the Digital Innovators' Summit 2014 in Berlin, Germany (more at www.innovators-summit.com)

Are there specific industry innovations that really shaped where Buzzfeed is today and the type of company it is?

There are probably two main industry shifts that put us where we are now. When I started at Buzzfeed everyone was focused on SEO. It was being done very successfully by the likes of the Huffington Post and everyone was watching that – trying to increase search with keywords and terms. There was a moment, however, when Google introduced Google Trends for search. Suddenly we had data and other information about what people were searching for. That changed our approach. We had always had our own internal algorithm and we had this notion that we were going to use editorial expertise and data in combination – but when Google Trends launched, that was the first time that idea got really externalised.

The second big shift was around mid-2010, when Google changed its search algorithm. We started seeing more referrals from Facebook than Google. For a long time we had been creating content that was good for sharing, but now we had the first sign that shared content was going to be a big part of the web and not just a niche part of it. Given that, we recognised that we could be in the business of creating content for sharing on the web, rather than just documenting the content that was being shared. It meant we were setting the agenda rather the just reporting it.

Buzzfeed is successful where many are not. Why do so many businesses get social so wrong?

There are some common mistakes – and they are often around point of view rather than what people do in practice. The first is that people tend to think of social as an afterthought – you create something, you come up with a social strategy for it and you hope it works. Social should be considered when you create the thing in the first place. Think about the experience for the user rather than simply creating a hashtag strategy as an afterthought.

People also get very hung up on numbers. Data is of course very important, but in the first wave of social media particularly, people got hung up on raising the number of Facebook likes or the number of Twitter followers they had - rather than focusing on whether they were adding value. That's not a great long-term strategy. Over time you want he people who are really engaged and active.

What role will data play in social media going forward?

It's certainly fair to say companies are using data more and more. But I think it's a mixed bag and in certain areas of our industry it's being used less than in others – it's not really something that comes up much in the newsroom, for example. Of course, there are a lot of good third-party tools available now for people who want more insight. For us, we've been lucky that from the beginning we have had a big tech team and the platform that we use is all proprietary – so all the editors have a dashboard which allows them to see quickly whether something is being liked, whether it is being viewed, whether it is being passed around. That's a valuable tool, but overall we want people to balance their dependence on numbers with good editorial judgment.

What is your view on social media’s growing role in news?

Social is really setting the news agenda now rather than following it. If a story breaks, often the emerging information is available through social media channels before it is reported through mainstream news. A big part of what a news organisation like Buzzfeed has to do around breaking news now is to cover what is being put out through social media. So sometimes our role is to say: “There are rumours going around that there is a storm taking place, here’s a picture of that storm, but we think it is fake and here is the evidence of that.” This happened a couple of times this year, where false information was deliberately being put out. News organisations can't ignore that. It’s no use pretending the world isn’t turning to social media for breaking news. So we have to play a role in identifying what’s real and what isn't.

How do you see social media evolving from here?

The fact is that social media is now a medium in its own right, and the fact people use it to follow news events shows it is becoming increasingly trusted. We saw this with the web too – in particular with blogging. In the beginning, everyone was very sceptical and didn't trust blogs. But as people were doing good work and establishing a reputation, readers began returning to them and trusting what they had to say. I think the same thing is happening on Twitter.

As for the future, I can only assume there is going to be greater convergence. There is something about the nature of breaking news that fits really well with Twitter, with little bits of information being released one by one, and in a structured way.

Why is Buzzfeed flourishing where others are not?

One of the things that has benefited us is the DNA of the business. It is very flexible. It’s not that we’ve totally pivoted our business model, but the way the web works has changed a great deal over time and we have been able to adapt to that. Experimentation had also been very important, as has our company culture. We have a real sense of fun about what we do – and I genuinely think that is central to the success we have. We’ve also had good technology right from the beginning. We were really a tech company with a media sprinkle on top, and that has helped us respond to change. And I think we’ve been lucky. We moved into thinking about social media at the right time. We were interested in it and it took off in a massive way.

Finally, what is Buzzfeed focusing on in the coming year?

The two big areas for us are definitely mobile and taking Buzzfeed global. Mobile is probably the focus for everyone. It’s where a lot of our readers are going so we want to continue to think about their experience and how that works on mobile, handheld and tablet devices. And we think there is a great opportunity to grow a truly global readership. We have a very international readership now, but we only offer Buzzfeed in different languages in a small number of countries. So in 2014 we’ll be looking to expand that list.

Scott will be speaking at the 2014 Digital Innovators’ Summit in Berlin. To find out more, visit www.innovators-summit.com.